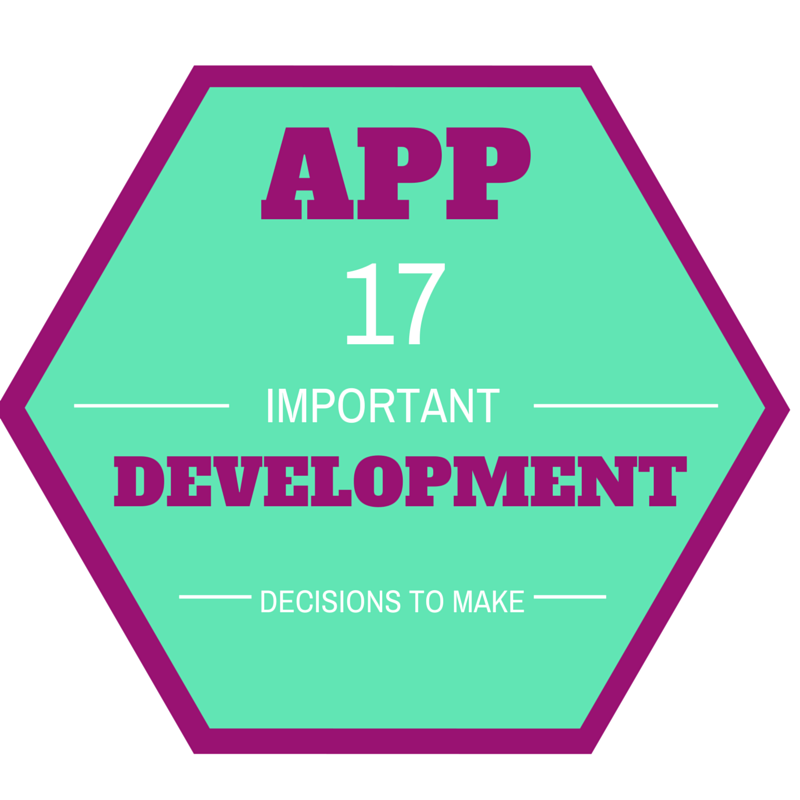 Application development is a complex task which can get long and protracted depending on the type of app being developed. There are times when you have to make important considerations with regards to the app for its potential success.

This starts from the moment you start developing an app to the upgrade stage once the app is developed. The choices to be made are regarding the following:

There are several types of apps in the market. Each type of app has its set of advantages or disadvantages. All the different types of apps are meant for different purposes. The options on the type of app you can choose are:
a) Native App
b) Web App
c) Hybrid App
d) Enterprise App

There are mobile phones which run on different mobile OS. You have to decide whether you want to App development for:
a) Android
b) iOS
c) Windows Phone
d) Blackberry

There are two main kinds of apps: static and dynamic. Static apps are entirely stored on your mobile device, and work without needing data or internet connection. An example of such an app would a Flashlight app. Basically, these apps just display any information or perform only a core functionality; also, they are updated only periodically from Google Play Store or Apple App Store. On the other hand, dynamic apps need access to a server in order for them to function properly. This means that they need a data connection either through your phone’s carrier or Wi-fi. Dynamic apps use this data connection to loads images, videos and other text-based real-time content. Since such apps are regularly updated, they are also the one’s to receive frequent upgrades through the app stores. An example of such an app would be a social media networking app like Twitter. So, you can choose to have either a:
a) Static app
b) Dynamic app

Apps can also be differentiated by the type of their user interface. Some apps tend to have showy/glamorous interface, while others are comparatively bland and stripped-down in their appearance.The types of interfaces that an app can have are:

An app might require security depending on the data it stores. Apps that store private data like bank details and credit cards, require enhanced security to those that only store username and password. Some other static apps don’t require any security at all since they don’t require the user login functionality. An app might need any of the following security levels depending on its functionality and usability:
b) Minimal security
c) High-level security

It’s no secret that app rely on a mobile device’s firmware (hardware) to deliver the powerful experience. However, not at all apps need access to features of a mobile device such as camera, sensors etc. Such apps can avoid the extra costs involved in getting support for these device firmware. Apart from that, an app can also support external hardware such as a computer, a watch or any other gadget or device. This can incur additional costs brought upon by the additional custom codes required to support them. So, an has the following choices:
a) No firmware usage
b) Minimal firmware usage
c) Comprehensive firmware usage
d) External hardware compatibility
These options can be mixed and matched depending on the suitability of an app.

The functionality of some apps in the market is heavily reliant on technology usage, whereas other apps are able to stand alone without making much use of technology, because of the inherent information or features. So, like different strokes for different folks, apps can either:
a) Adopt existing technologies without taking much risk or
b) Adopt the latest technologies and stay a step ahead of the competition

An app, depending on what is it functionality and what technology it utilises, might need upgrades from time to time after it is published in the market. Dynamic apps require more upgrades or code pushes than static apps. So, an app can plan to have:
a) Negligible updates
b) Regular updates
c) Intermittent updates

Deadlines are a part of the business ecosystem. Projects need to be completed within a specific timeframe. It’s no different with apps, because temporal accuracy can make or break an app. So, based on when apps need to be brought out in the market, they can have:
a) Immediate deadlines
b) Moderately fast deadlines
c) Flexible deadlines

14. Volume of data and user base

Features of apps vary from one app to the other. Some apps are content-heavy whereas others are laden with plenty of functionalities. Similarly, the user base also differs drastically between two different apps. So, when developing an app, you have decide whether you want an app with:
a) Minimal Data & user base
b) Moderate Data and User base
c) Huge data sets and intensive user base

Offline capabilities make your app usable even when your mobile phone is not connected to a data network. This is applicable for all static apps and some dynamic apps. The only two options for offline capabilities in your app are:
a) Yes – include
b) No – exclude

Revenue generation is one of the important objectives to remember when developing an app. There are several alternatives when it comes to choosing to earning revenue from an app; different types of app tends to have different revenue model to suit their functionality and to get the maximum benefit out of it. The many revenue models are:
a) Paid downloads
b) Freemium model
c) Ad-based
d) Subscription